RA Course at Apollonia House 26th Nov.
Now we are safe and sound back home in Newbury it is time to reflect and take stock. The word that keeps coming to  mind is... interesting, in many of the connotations of that word.

Interesting point one: The amazing location of Apollonia house, perched on an outcrop overlooking a valley in the area of Saddleworth Moor with wonderful views in all directions.

Before going further I must now pay tribute to Andy Lane, not just for hosting us at his stunning practice but also for spending almost the entire day in the background, working pretty much non-stop to try to fix several IT problems that descended on us simultaneously like a perfect storm.  Thanks to his efforts most of the main issues were solved though one or two did remain to take the shine off some aspects of the program, it is fair to say.  Still lessons have been learned.  It is always more of a challenge delivering the course away from our home base.

In addition more thanks go out to several people.

First and foremost to my other half Chris, who soldiered-on gamely, to help the day run as smoothly as possible, having gone down with a cold the night before and having been awoken by the hotel alarm going off 3am ahead of our planned 6.30am start.  This early rise ensured we missed the hotel breakfast, to start our set up.

Secondly, a huge thanks to our sponsors, Janet Pickles of RA Medical Services, whose attendance, input and help on the day by bringing duplicate mobile equipment and tubing, allowed us to adapt the equipment to the layout at Apollonia House. Also thanks for her generous sponsorship contribution toward the delegates lunches.  Thanks also go to Jane Walters from Orascoptics, who also attended from 8.00 am and who provided an additional sponsorship contribution.

Thirdly, more huge thanks to Eva, Andy Boon's nurse who came in for the day, leaving an 8 week-old baby with dad, to ensure the clinical side ran very smoothly, as well as participating in the learning for the day. Eva was a great help to us and a great ambassador for the practice.

Last but not least, thanks go to Dr. Andy Boon, an associate at Apollonia House, who gamely took on the live treatment on one of his very anxious dental patients, (who had said,"I don't do dentists") whilst being watched by 14 other dentists and two nurses.

I undertook and oversaw the sedation, while Andy and Eva carried out a composite restoration. Despite hiring a camcorder especially for the occasion (as mine had been playing up) Andy Lane and I were unable establish a wired connection, to the projector, in the way I normally do, to relay images of live patient treatment to the delegates in another room.

As the surgeries at Apollonia House have glass walls and we used a corner surgery, with the patients permission, all the delegates could watch proceedings directly with some relayed commentary from me where appropriate.

So, interesting point number two. This was the 26th one-day course I have run and the 5th away from Newbury. The delegates were amongst the most diverse we have had. Two were highly experienced sedationists though mainly with IV sedation. Roy Bennett a colleague I had met before via SAAD and the DSTG, teaches at Liverpool Dental Hospital and has his Dip Sed. so as GDP myself, that was always going to be a challenge!  Roy was very gracious I must say.  The other GDP with IV sedation experience came with her nurse from N. Wales and they were the first Welsh delegates we had had
since I started in 2003. Interesting!

Another GDP delegate, Mick Speakman from Barnsley, was attending for the third time with three new associates. Mick has many years experience himself with RA and so had one of his three associates but they were happy to have a refresher.  We were also joined by a dentist and his nurse who flew up from London and another GDP and his nurse who were driven up from London, that morning, by their practice manager, who delivered them, went off for the day himself and then returned to drive them back to London. A 17 hour day for them!  We also had two dentists working in Aberdeen, one Portugese, one Spanish who had flown in the previous day to learn with us that day.

So it was that Chris and I first met Andy outside the practice at 7.30, still in the dark to unload the equipment and deploy it around the practice.
Back to my opening thoughts. Interesting. The practice itself is interestingly designed.
Glass walls around three sides, a continuous corridor running around all the surgeries leading to and from the reception area. 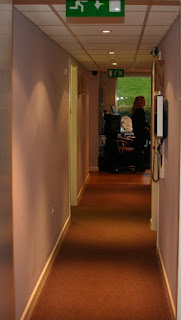 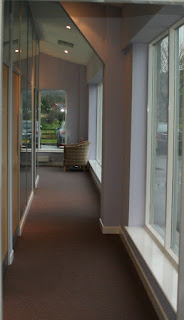 Each surgery having a glass wall too. 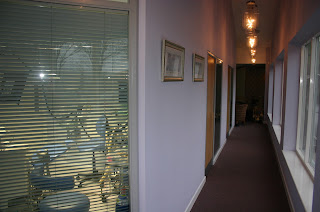 Privacy is ensured by a built in blind system, but when the venetian slats are rotated, a view is afforded of the surrounding hills and valleys for mies around.

We did have another interesting challenge though as none of the surgeries therefore have external windows and the external glass walls of the practice have no openings either. Since we require waste gases to be actively scavenged and exhausted out of  the building, we had to come up with a solution for the day's demonstrations. 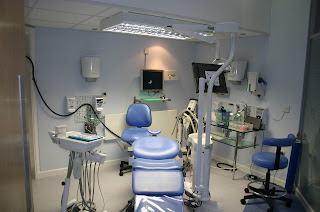 We did know the situation in advance and Janet Pickles of RA Medical services came armed with about 7 metres of exhaust tubing which Andy Boon succeeded in attaching to the air con vent 5 metres up, by fully extending himself on top of a ladder with me steadying it whilst the delegates, unaware, were having a break. You can see the black tubing snaking its way across the back of the surgery. rather spoiling the aesthetic! The RA machine can be seen in the back right corner.


The next highlights, were also "interesting".  In the afternoon we had our usual live demonstration patient. She had been selected too weeks earlier and had agreed in principal.  I had spoken to her the previous week, to reassure her and fully explain the procedure, to obtain her informed consent. She arrived with a friend for moral support, who by her comments, sounded even more anxious, about dental treatment herself.  However with Chris's excellent support and reassurance she did hesitatingly come through to the surgery. We proceeded to use inhalation sedation and by this time the delegates were observing via half-closed venetian blinds. The sedation proceeded very nicely and then Andy Boon took over; provided the L.A. and proceeded to complete the planned lower premolar restoration, all with a totally relaxed patient.

Interestingly,  as he was completing the last few moments of the procedure, the small oxygen cylinder began to run out (and with that the, nitrous oxide supply too- a safety feature).  I decided that rather than start switching cylinders, since all that was left to do was polish the top of the filling on an anaesthetised tooth, there would be no problem. I reassured the patient that over the next to or three minutes the happy air relaxation would go away but since there was no more injections or drilling to do, all woul be well.  Even so, as Andy finished off polishing the surface of the filling and the RA wore off, eveyone noted how the patient's totally relaxed demeanor changed. Her relaxed arms and hands became defensively folded. She drew up her legs, which had been flat on the chair and relaxed and generally returned to her usual anxious self, for the last minute or so.

Now for the the next interesting event. I asked the patient ( as I usually do) if she would be prepared to tell the delegates about the experience. Very briefly, she said that as a psychiatric nurse, indeed a matron, she liked to be in control but that she had been very surprised at how effective the technique had been in reducing her anxiety and that she would be happy have her treatment that way again.
Not a surprising result to those of us who have seen the technique used successfully but a real eye opener for those new to it. She also said how interesting it had been for her to compare treatment whilst sedated this way with the last 2 minutes when the sedation was wearing off.

We all thanked the patient as she left and then there was more of interest. Andy Boon agreed to come forward to give his story. He has treated this patient several times before,  but it had always been difficult. A defensive tongue, frequent stops and so on. This time, Andy noted a complete change in her.  Her tongue rested out of the way, at the back of her mouth and he was simply able to get on with the job in hand. Perhaps he would be kind enough to say more here soon, if I ask nicely!

At he end of the day's learning some had to leave early to get their transport. I have 9/15 feedback questionnaires returned.  When I have more, I'll publish these too. That will be interesting.

All in all, despite some IT hiccups, I believe everyone had an interesting day!
Posted by Dr.Richard Charon BDS at Sunday, November 27, 2011

Firstly, I must thank Richard for providing such a worthwhile, relevant and very interesting day. My thanks also go to Chris and Janet for their efforts in making the day what it was for me. Also my thanks go to "the boss" Andy Lane. Without Andy's organising and work on the day this opportunity would not have been possible.

On a personal note I was very pleased as the treatment of the live patient turned out to be massively beneficial from a clinical and learning objective.

As Richard has said above the patient went from being completely relaxed and more straightforward to treat, to her usual tense and awkward disposition making treatment much more challenging.

The inhalation sedation provided a feeling of calm, created a pleasant atmosphere to work in and the patient certainly felt this way making the treatment (almost) a complete success. As Richard detailed the treatment was hindered by the oxygen running out but this did provide the interesting learning perspective.

Overall, I was very happy to tell the group how much I valued the inhalation sedation as part of dental treatment, and despite one or two tech glitches I had a fantastic day! 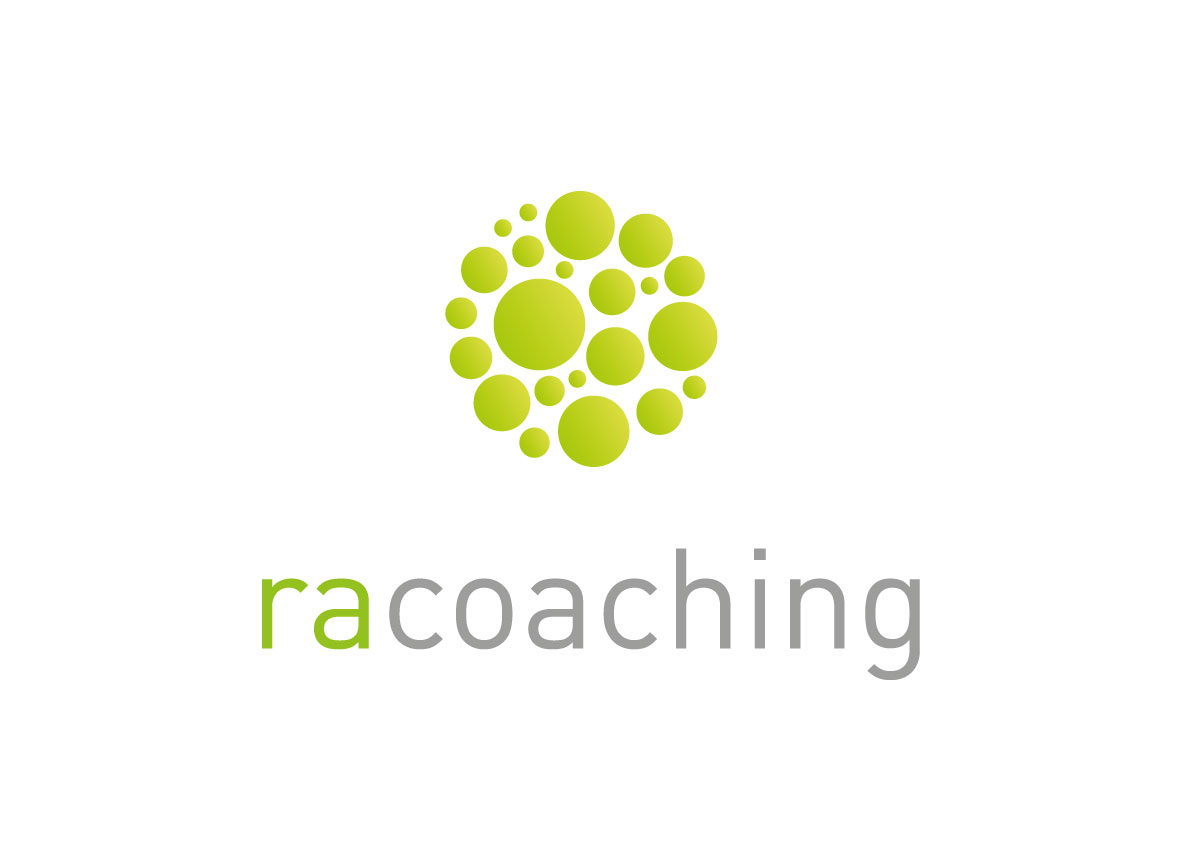